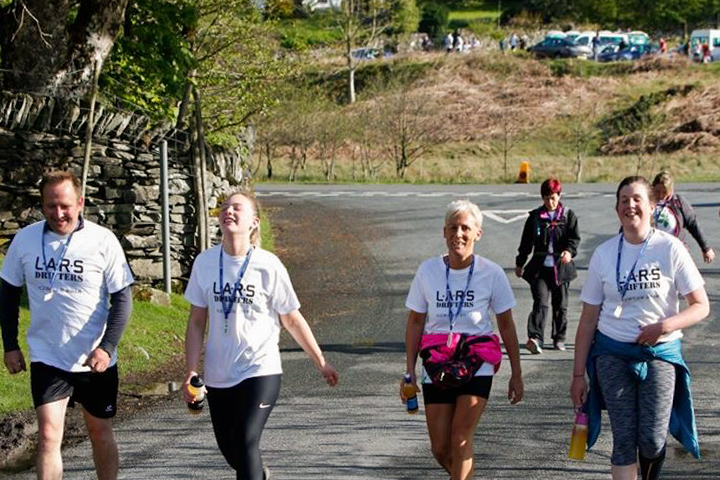 The LARS Drifters – our team which took part in the Keswick to Barrow Walk on 12 May – has raised in excess of £1500 for local charities, St. John’s Hospice and Unique Kidz and Co, and we would like to say a big thank you to everyone who sponsored us.

We started the forty mile walk at the crack of dawn (well 5.30am) just to the south of Keswick, before following a route which took in Thirlmere, Dunmail Raise, Grasmere, Elterwater, the Langdales, Coniston, Nibthwaite and Lowick. We then struggled up the steep climb at Kirkby Moor before dropping down into Marton, Dalton-in-Furness and finally, and very happily, finishing at the Hawcoat Park Sports Club in Barrow-in-Furness.

This was a fantastic team effort and a great way to see some of the most spectacular and challenging locations in Cumbria. Well done LARS Drifters – Julian Cooper, Donna Tyson, David Barr, Heather Cooper, Emily Barr and Charlotte Mallett. And of course, Imogen Barr, Sandra Nicholl, Amy Dixon and Rachel Mallett, who took part in the Coniston to Barrow walk.

St John’s Hospice and Unique Kidz and Co are the LARS chosen charities for 2018. They do such a great job in the local community, so we’re thrilled to have raised such a good amount for them.

St John’ Hospice has been caring for its community since 1986. Providing free palliative care to patients with life-shortening conditions, its services cover communities across the South Lakes, North Lancashire and parts of North Yorkshire. For more information, please visit: https://www.sjhospice.org.uk/

Unique Kidz and Co was founded in 2009 by two mums, Denise and Jane, and provides a trusted service for disabled children and young adults. The charity provides a place to play, have fun, make friends and be unique. For more information, please visit: http://www.uniquekidzandco.org.uk/

It’s amazing what you pick up when you have around forty miles (and just shy of twelve hours) to fill. We discovered the history of the K2B walk. The Coniston to Barrow walk is a more recent addition, starting in 2010, but the K2B walk is well established and can trace its roots back to the early twentieth century and the then US President, Theodore Roosevelt!

History of the Walk
This year’s Keswick to Barrow Walk was the 52nd time the event has been staged. The first walk took place in 1967, a race between three teams working in Barrow at the time: the crew of the HMS Resolution, the first Royal Naval Polaris Submarine which was under construction at the Barrow Shipyard; the shipyard workers; and the Commercial Department of Vickers. Although the HMS Resolution Crew won the team contest, the first participant to arrive in Barrow was a member of the Shipyard Workers’ team.

The first walk was actually 50 miles in length, a distance which can be attributed to comments made by the late US President, John F Kennedy, who said that “every American should be capable of walking 50 miles in one day”. Furthermore, on hearing of a 1908 Executive Order issued by then US President, Theodore Roosevelt, which required that all Marine Corps Officers be able to walk fifty miles in under twenty hours, JFK replied, asking if US Marines were still fit enough to complete this test.

Today’s walk certainly tests the resolve of those taking part, but the event has proved to be a huge success over the years, and the number of participants has certainly increased. In 1967, there were just eighty-six participants; by 1976 this had grown to 1732 walkers; and nowadays it is common for around 2500 people, from across the UK, to start the K2B. The event has also meant that around £4m has been raise for charity.

Ok, the burning question we’ve been asked several times – would we do it again? Let’s just say – never say never! It’s a long way and the sense of achievement at the end is fantastic, as is the sense of relief. We can start thinking about 2019 when the legs have stopped aching!