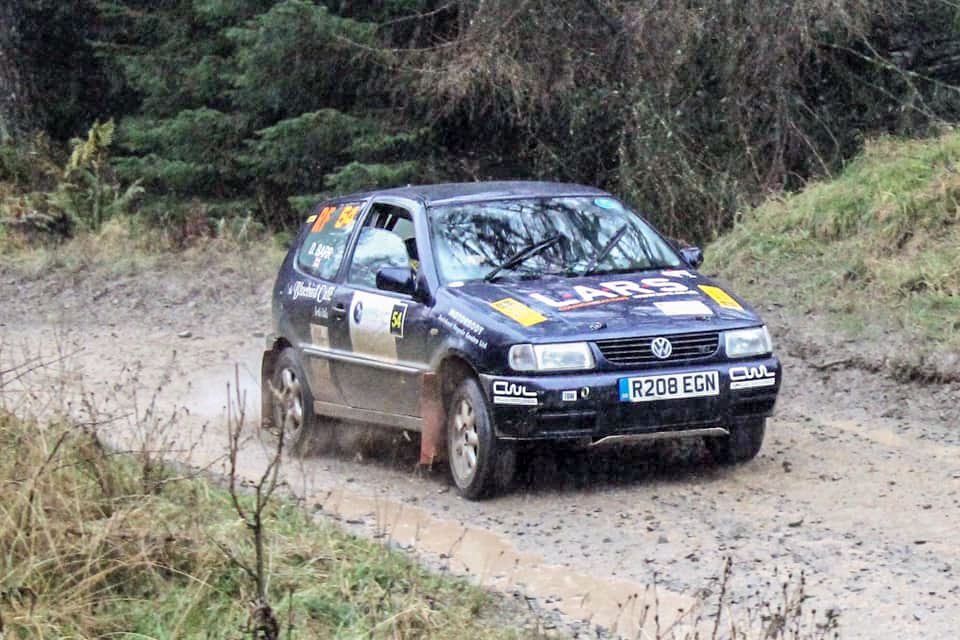 LARS rigger, Dave Barr, has been at it again. Not content with working at height, rigging towers or carrying out essential structure maintenance, Dave has sought extra excitement by throwing his little Class 1, LARS-sponsored VW Polo around the twists and turns of the Grizedale Stages Rally. And just to make the challenge that little bit harder, it rained… all day.

This year, the Grizedale Stages Rally had a new starting point – Monks Coniston, complete with stunning views of Coniston Water (well, stunning views on a clear day, but did we mention it was raining?) Not that the competitors were taking in the views of course, with five rally stages ahead of them, totalling a little over forty miles, preparation was key.

For Dave and his co-driver, Neil Mitchell-Hunter, this was their fourth race together and they enjoyed another successful day, finishing second in their class and twenty-third overall. Not bad when you look at some of the other cars taking part in the event, brands with years and years of rallying pedigree – Subaru, Mitsubishi, Ford and Peugeot. And even better when you consider that their VW Polo has not been modified – it’s put into Class 1 due to its engine size, but most Class 1 cars are modified 1400’s.

And it’s fair to say that Dave was pretty happy with the outcome; “What a fantastic day, a real challenge. Our Polo may not be the fastest car in the forest, but she stays on the road – well most of the time, Dunnerdale Ditch proved a little tricky! The tyres worked a treat.

“As always, a huge thank you to everyone involved in helping us on the day and for all the support. It makes such a massive difference. And thank you to the organisers and the marshalls – in that kind of weather I know where I’d rather be, inside the car!”

From all of us at LARS – well done Dave and Neil. A superb effort. We’re looking forward to the next one already.