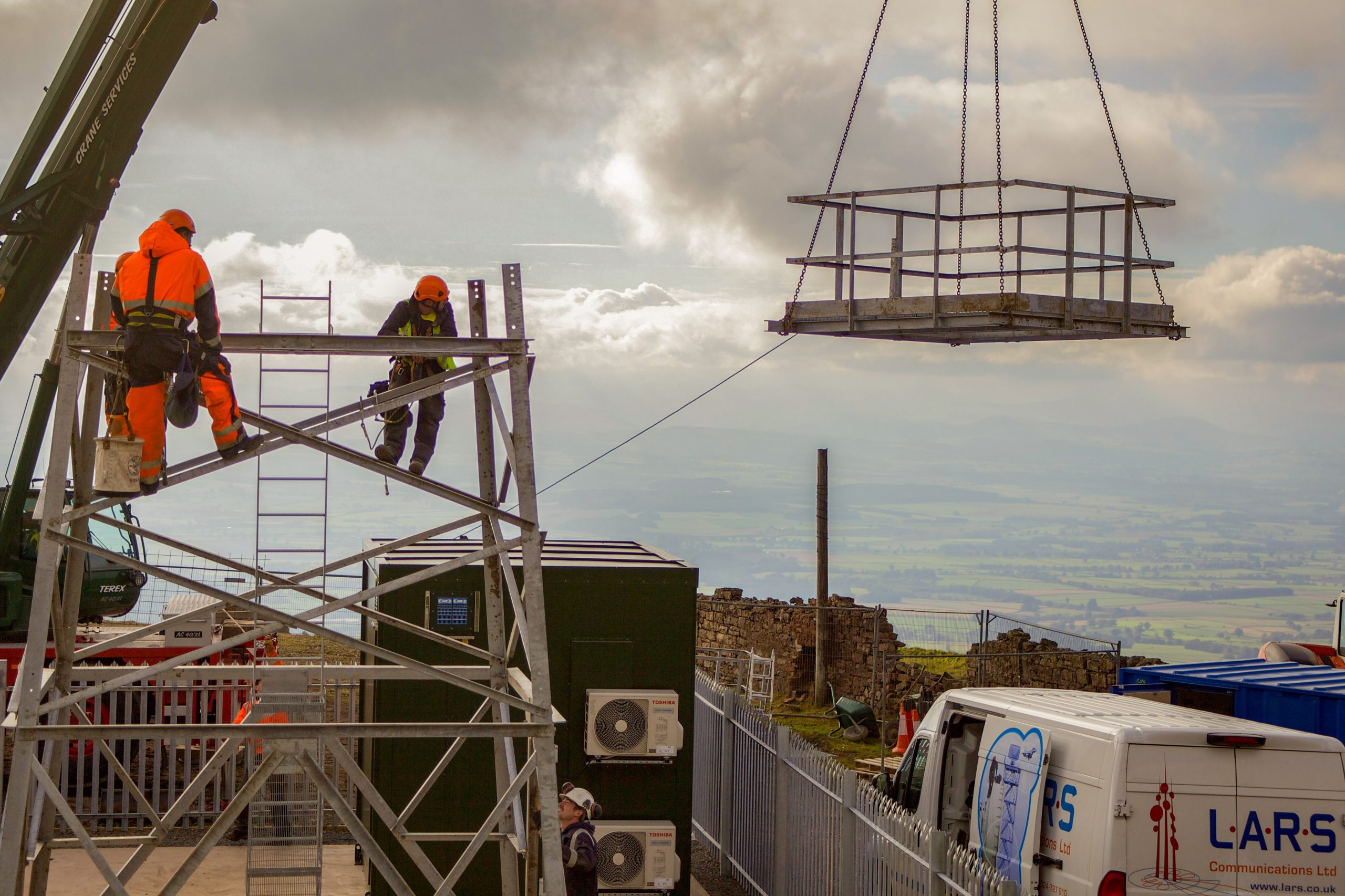 We recently carried out a tower installation and radio site build project on Great Dun Fell and it got us thinking. It made us realise just how lucky we are at LARS Communications. Our work takes us to some of the most incredible places in the UK, and sometimes further afield. It’s certainly not something we take for granted. We’re very aware that many jobs don’t come with views across London, Lincolnshire, the Lake District or the Inner Hebrides, to name but a few. So, we thought we’d highlight some of the amazing places where we’ve been fortunate to work, starting with Great Dun Fell.

At 848 metres, Great Dun Fell is the second highest mountain in the Pennines, standing very slightly in the shadow of its neighbour, Cross Fell (893 metres). However, Great Dun Fell is possibly the better known of the two for a couple of reasons. The first is the radar station on its summit, the huge, gleaming white radome standing like a giant golf ball and visible from miles around. And the second reason is that its home to the highest paved road in the UK. The two of course go hand in hand.

The radar station is operated by National Air Traffic Services (NATS) and plays a vital role in the Air Traffic Control System for Northern England and Southern Scotland. And in order to access the radar station, you need a well-maintained road.

For those working at the radar station, the views are spectacular. To the west, the Lake District Fells; the Pennines to the North and East; and to the south the Yorkshire Dales. But you don’t have to work for NATS to enjoy the views, you just won’t be able to drive up to the summit. To reach the summit you’ll have to make your way on foot, on a bicycle or on a horse. We’re sure there are other forms of transport, but these seem to be the popular choices. Particularly bicycles.

A Mecca for Cyclists

The road to the summit of Great Dun Fell has become a mecca for cyclists, a climb which, according to roadcyclinguk.com, is heaven and hell for cyclists in equal measure (you can read the full article here: https://roadcyclinguk.com/cycling-routes/north-pennines.html). It’s a 4.5 mile climb up a lovely stretch of tarmac where the chances of meeting another vehicle are slim.

The article goes on to say that “the climb is sometimes referred to as the UK’s Mont Ventoux and it’s easy to see why. It’s barren and dramatic in equal measure, and Ventoux’s weather-station can be swapped for Great Dun Fell’s radar station.” Unlike Ventoux (in the Provence region of southern France in case you were wondering), Great Dun Fell is an out-and-back climb, the back obviously being far easier!

As well as the traffic cones which guide maintenance vehicles to the radio site build, there is plenty of evidence of mining activity. The landscape is home to not only the original brake house, but also to several disused pylons, some still standing, some lying on their side, some long since gone, only their bases remaining.

According to historicengland.org.uk, at least seventeen pylons were used to support the aerial ropeway as it transported ore from Silverband Mine, down the steep fellside, to the ore processing works at Milburn Grange some 5km away. During the course of the 19th century, Silverband Mine was worked by the London Lead Company where they mined periodically for galena, and then more recently, from 1914-1918, for barytes.

However, productivity increased dramatically from 1939 when the La Porte Chemical Company took over the mine. In fact, from 1939 – 1963 over 210,000 tonnes of dressed barytes ore was produced at Silverband Mine.

Following the closure of the mine in the 1960’s, the aerial ropeway was dismantled, and apart from a transmitting tower and the radar station, we are left with a typical Pennine landscape, a landscape dotted with sheep, criss-crossed by drystone walls and patterned by mosaics of woodland, grassland and moorland.

All in all, not a bad place to call the office.

For anyone interested in the history of the mine, please visit – https://historicengland.org.uk/listing/the-list/list-entry/1021009 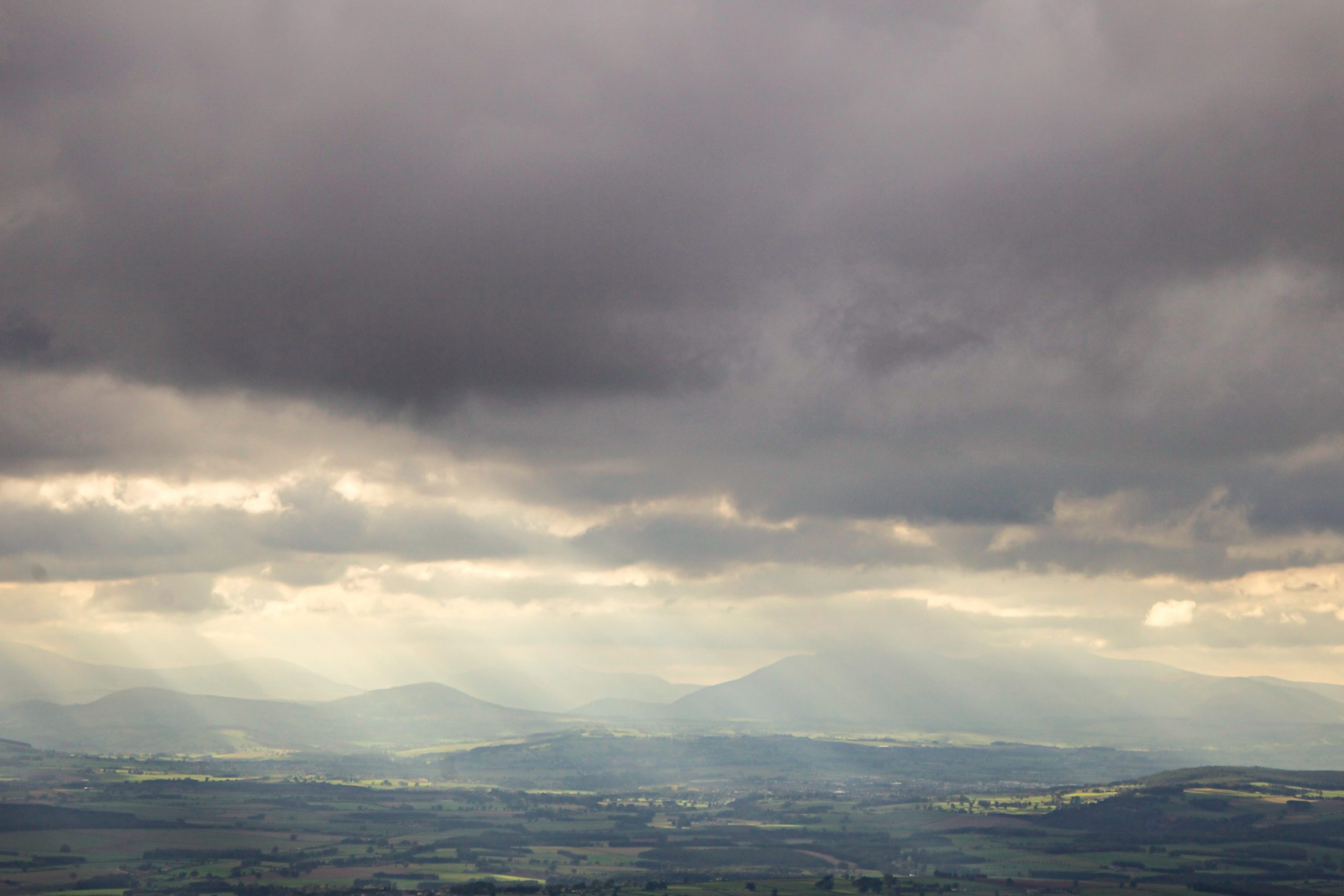