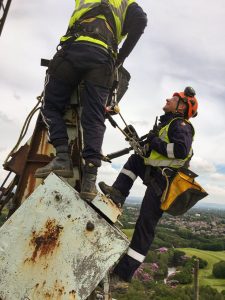 We have recently undertaken a far from straightforward decommissioning job at the top of Heaton Park Tower in Manchester.

We were called in to remove the turret crane, which sits right at the top of the tower, and all associated steelwork, as well as blanking the opening and installing a new hatch to close the opening.

However, before we were able to carry out any of the work, scaffolding was erected around the turret crane to allow safe access for those involved. Scaffolding was carried out by Chapman Scaffolding.

Once in place and good access ensured, the site was resurveyed in order to re-evaluate the method statement and the risk assessment, allowing us to amend the proposed methods of work if required.

Preparation for Steelwork Lifting and Removal

At ground level, the site access was cleared and prepared ready for crane access to the site. Lawson Crane Hire provided the crane.

Back at the top of the Heaton Park Tower, any small attachments to the structure were removed and stripped away. The structure was then marked up into suitable size components, ready for final cutting up and removal.

The opening left by the turret crane was sealed with a new deck plate and Bilco hatch, allowing future access to the top platform level.

Finally, the steel was removed from the site for disposal and recycling. On completion of the turret crane removal, the site was cleared, tidied and made good.

The History Behind Heaton Park Tower

Built in the 1960s and standing at 238 feet, Heaton Park Tower is a telecommunications tower built of reinforced concrete and located close to the banks of Heaton Park Reservoir. But there’s more to the tower than meets the eye.

As one of three ‘Radio Relay Stations’ it links with the BT Tower in London and the Birmingham radio tower. It is one of several towers which formed BT’s ‘backbone system’ and which were built to the ‘Chilterns Design’, so-called because they are capable of transmitting over the Chiltern Hills in the South-East.

Its first public mention was in the 1965 Defence white paper, where it was described as part of the ‘backbone network’. The paper also alludes to plans to build up a special network, designed to maintain long distance communication in the event of an atomic attack. This explains why the base is made of reinforced concrete – it’s designed to withstand such a blast.

When it was first built, it stood alongside an underground Royal Observer Corps Underground Monitoring Post. This was an underground bunker which would have been manned 24/7. However, this monitoring post was abandoned before 1995.

Today, the tower is a conventional radio relay station with point to point microwave and other radio links.

But if you happen to find yourself strolling through Heaton Park, you’ll know that the looming tower next to the reservoir has quite a history.

For more information about the range of services we provide, please click here. 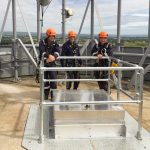 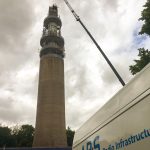 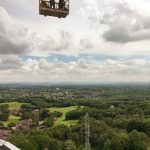 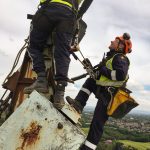 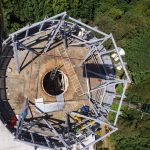